“This girl came to play,” Marchant Couick said as she motioned toward 14-year-old Zanaasha, who was furiously taking notes at the front of the LiquidPlanner lunch room. Zanaasha smiled. She continued to write as Couick explained her work as a renewal specialist to the roomful of eighth-graders.

The five other panelists went down the line, telling the students from Seattle Girls’ School about their jobs. Then LiquidPlanner CEO Liz Pearce asked if anyone has questions.

A hand went up. “What framework do you use?”

Another hand. “This question is for you,” she said, pointing at Zareen Maurer, senior marketing manager. “How do you know what message to send?”

Maurer gave an overview of inbound marketing and the tools LiquidPlanner uses to deliver the right messages at the right time.

After the panel discussion, the students were quizzed on their knowledge of software, marketing, and sales terminology. Three students got perfect scores, earning them LiquidPlanner swag.

The girls’ visit to LiquidPlanner on April 21 was just one stop on their “Entrepreneur Day,” which included stops at startups around Seattle. This is the third year that LiquidPlanner has hosted students from SGS. Pearce came up with the annual field trip idea with a group of female CEOs who visited Seattle Girls’ School.

“The goal is to show the girls what kinds of STEM jobs are out there,” said Pearce. “We want them to see that careers in technology, innovation, and entrepreneurship are all within the realms of possibility.”

During lunch, I sat down with Kyleigh, Grace, Zanaasha, and Belle, all 14, who have ambitious dreams for their careers.

“A lot of people make fun of me for this,” Belle said. “But, I want to be a museum librarian. I want to organize things, so people can enjoy them.” 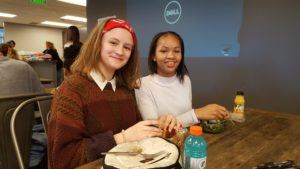 Zanaasha knows she wants to work in politics. Grace isn’t quite sure. “I really love nature, but I also really love dance,” she said. Kyleigh wants to be a fashion designer or an author. “She writes the best fan fiction,” Zanaasha told me. “I don’t know anything about Star Wars, but her stories made me like it.”

While none of the girls I spoke with expressed an outright interest in STEM careers before the talk began, they all listened intently, asked questions, and seemed to come away with a better understanding of career options in the technology field.

And that’s really the goal of events like Entrepreneur Day. Grace’s love of nature may lead to a career in biology. Kyleigh could use engineering skills to build better running shoes. Zanaasha may someday help bridge the gap between science and politics. Belle may design new ways to enhance museum-goers’ experience.

But first, they need that spark.

They have all the snacks that you could eat.  That would be awesome.

More than 50% of the people that work there are women.  That’s pretty cool.

There are so many different jobs within a single company!

Sometimes you have to fail to succeed.

There is always a new idea to be discovered.